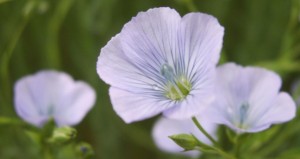 Flax, or Linum, belongs to the plant family Linaceae.
It is a fast-growing temperate annual with blue flowers.
Flax originates from the Middle East, North Africa and Central Asia (Egypt, Persia) but adapts well in various climates. It is known to have been in cultivation as early as 7,500 B.C. alongside the first cereals and vegetables. 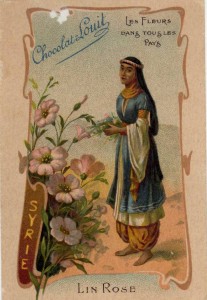 The first traces of the use of flax in France date back several millennia (notably in the Jura where fragments of linen have been found). Archaeologists have also unearthed primitive tools for working flax – combs, spindles, needles and wooden bobbins.
Flax was already used in linen production from the early classical period as proven by the carbon-dating of cloth fragments from Egypt and Asia. 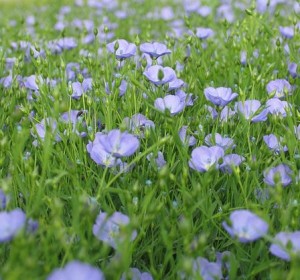 Cultivated flax (Linum usitatissimum) is a plant grown primarily for its fibres, but also for the oil content of its seeds. Flax fibres are used in rope-making and linen-production, and more recently have been incorporated in insulation materials for the construction industry. The seeds are crushed to make linseed oil for inks, paints and wood preservation as well as in preparations for human and animal consumption due to their rich content in Omega 3.

The principal stages in flax cultivation in olden times 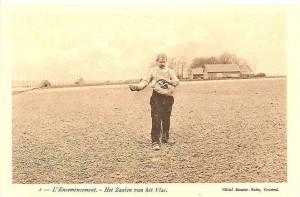 Flax seeds are sown in April, with the harvest taking place some 4 months later, in July or August.

At harvest, the plant is uprooted rather than cut, due to the woody nature of its stems. (The mechanisation of this stage of the harvest started after WW2.)
Once out of the ground the plant was subject to a very specific treatment process, involving several different operations, before it would be ready to ‘work’. 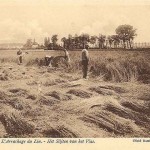 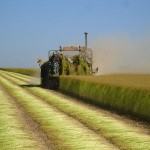 To begin with, it would be dried in small stacks, which would later be turned upright into ‘hedges’. Thereafter the plants would be transferred to large haystacks or ‘mills’, before being taken by horse and cart to the linen factory. There, the flax would be beaten or threshed to separate out the seeds. The fibrous stems would then be tied in bales, boxed up and taken to be soaked in the nearby river; an operation which encouraged the development of bacteria helpful in separating the fibres from the pith – a process known as ‘retting’. 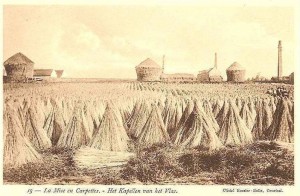 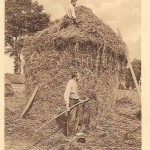 After the soaking, which would take one or two weeks depending on the prevailing temperatures of a particular season, the stems would again be dried out, before being beaten and crushed to extract textile pith from the wood. 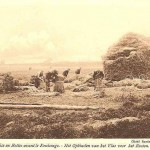 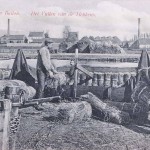 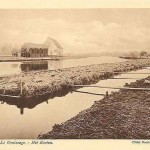 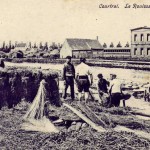 At the beginning of the C20 a shredding machine was invented, which would speed up the process and make it more economically viable. (There is a museum in Lyon dedicated to the inventor of this machine). 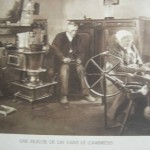 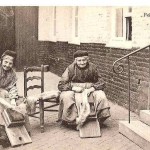 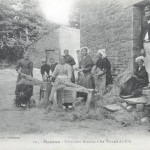 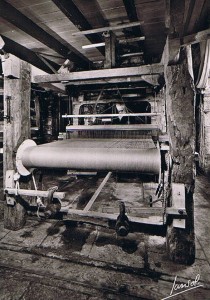 The shredding and separation process results in a mass of woody roughage on the one hand, and long straw-like fibres on the other.

Flax production: tools, methods and expertise in times past.

Setting aside the woody waste for other uses, the flax fibres would now be untangled and sorted by means of combing and carding, after which the tissue could be spun and woven with spinning wheel and loom. Natural successor of the hand-held spindle-whorl of ancient times, the spinning wheel was already in use in the Middle Ages, and by the C16 a foot pedal had been added to facilitate the process. However it was not until the early C19, during the Industrial Revolution, that full-scale looms were invented.

At last it would be time to weave the spun fibres into cloth, originally again by hand, then progressively through the C19 with mechanical looms. The resultant raw linen would then be whitened or starched, sometimes by simply being laid out in the open air and sunshine, and the cloth could then be dyed. 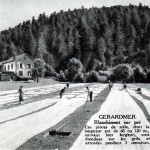 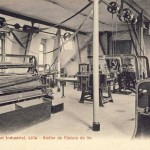 Many types of linenwear have been on display in the exhibition room of the Association du Patrimoine Seixois, adjoining the renowned Jardin de Curé, since 2011 : from work clothes, bonnets and warm night-shirts to light corsets finished in lace, socks and stockings, cushions and tablecloths.. Here you can discover the many uses of flax, both in material and clothing, and in household items more generally. 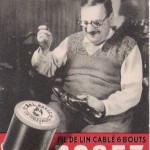 The exhibition shows the role of flax in the development of society, and the extent to which flax has continued to be of importance to the present day.